The idea to start YogaMakes came from a wish to give back.

To give back what yoga has given and brought to us.

The idea to start YogaMakes came from a wish to give back. To give back what yoga has given and brought to us. We want to remove the mystery and exclusivity that has surrounded the yogic tradition and make the knowledge available to everyone. We want as many people as possible to have the opportunity to study yoga in depth, and in this way we hope to spread some light into people’s lives. We also wish to spread light into the world by helping those who need support. We have already helped kids in India for many years and will continue share as much as we can with others. Dali Lama says that, “If every 8 year old in the world is taught meditation, we will eliminate violence from the world within one generation.” Isn’t that reason enough for us to start?

The people behind YogaMakes have a unique and deep knowledge of yoga.

Caroline started teaching and sharing yoga in Sweden in 2004, where yoga was not widely spread at the time. She ran a studio in Västervik for six years until her family expanded to three children. In addition to running a yoga school, Caroline has taught yoga in Swedish schools and prisons for many years. In addition, Caroline has also education in nutrition, energy medicine and sound awareness.

Caroline’s yoga classes are challenging with a sense of ease. The ease comes through instructions in order to learn proper alignment and to build from the foundation up. Her sequences are creative and fun, she uses props and smart ways to help you understand how to move towards posture you thought was out of your reach. By that it is also implicated work with the internal battles like fear, ego and unworthiness. She has a good eye and love for reading and understanding bodies and people. This precision of practice is about aligning asanas as well as what needs to be done in order to get rid of the illusions we might have about ourselves.

She emphasizes safety and her focus is  “safe practice” and teaching you to practice from your “here and now” state. Her aim is to bring you home, to find your inner space, through yoga and self-awareness.

“I grew up in Sweden and have always had a deep philosophical and spiritual interest in life. One reason is probably because as a kid I saw my Grandmother practice yoga. When I was 11 I told my mother that I wanted to go to India and as a teenager I started study Indian (Yogic) philosophy and around 20 started the physical practice of Yoga and decided that it was the path I was going to follow.

At 19 I became a restaurant manager over two hotels, but I had a plan from a young age to be a school teacher in philosophy, history and religion. To teach history to students so they would not repeat the same mistakes we did in the past, religion to respect and have tolerance for each other and philosophy to understand oneself, finding your own way and inner peace leading to a better world.

I decided quite fast that I wanted to share yoga instead as it in a deeper way could affect people leading to the same vision. I started to teach in hotels and at spas before I opened up my own studio.

In 2003 I took my first teacher training in Ashtanga Yoga and in 2004 I studied in India with Sashikala Ananth, a student of Krishnamacharya among others. It was not until I took Yoga Works Teacher Training in 2006 that I completely fell in love with sequencing and proper alignment and I have the privilege to continuously study with Maty Ezraty.

To practice and share yoga is a great privilege which I truly honor and respect.”

NOT A YOGAMAKES MEMBER YET?

When you join you get your personal yoga teacher online with videos (teachings & classes) that cover all aspects of yoga. 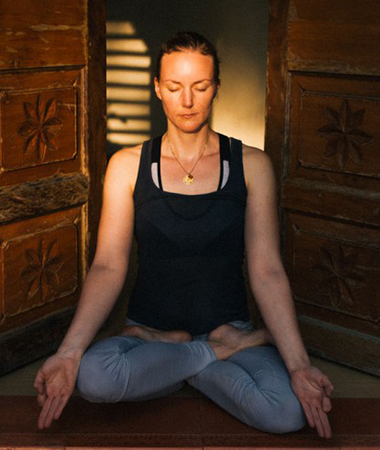 How would you like to have your own personal yoga teacher available to you at anytime, from anywhere?

Whether you’re at home or traveling, you can take a YogaMakes yoga class, meditate, practice pranayama or learn about an aspect of yogic philosophy when and where it is most convenient for you.